On the other hand, this could just be an ancient dick-measuring contest.

According to Open Culture, the above is a lovely color illustration of the oldest known depiction of dick decapitation, a bas relief discovered in Egypt (shown below). Apparently, the image dates back to 2400 B.C.E, which would predate the story of Abraham by only a few centuries.

Since Open Culture already did the research on this, I’ll just tell you more of what they said about the history of circumcision. Apparently, Egyptian remains as far back as 4,000 B.C.E. show evidence of the practice. Aren’t you glad iPhones exist? Human beings came up with some really weird crap without smartphones to distract us.

According to an essay Open Culture dug up, circumcision happened to a whole bunch of people at once back in the 23rd century B.C.E., not to one poor baby at a time. This is a dude named “Uha”:

Hi everyone, we are experiencing an unexpected site outage. All hands are on deck and we will be in touch with an update as soon as we can.

SoundCloud is not working! This is very sad! It means that all the episodes embedded in the episodes page are not working for the time being. But you can still listen to the show by using the “Download now” links, by heading to the iTunes store, or at the hosting service here.

SoundCloud is working again! Enjoy all the OMGWTFBIBLE you can consume, anywhere you like!

I don’t know if you’ve realized, but by making fun of religion, OMGWTFBIBLE is actually serving a greater sort of holiness. In The American Scholar, Brian Doyle writes about the benefit of weaving humor into religion:

For all that religion has been a bloody enterprise through history, and for all that religious people seem often the most almighty easy people to offend, and for all that there are many people in my faith tradition who think I am an idiot to grin over the most colorful of our traditions, I think we should grin over the more colorful parts of our faith traditions. For one thing, they are often funny—imagine the wine steward’s mixed feelings at Cana after the miracle, for example—and for another, it seems to me that real honest genuine spirituality is marked most clearly by humility and humor. The Dalai Lama, Desmond Tutu, Meher Baba, Flannery O’Connor, Sister Helen Prejean, Pope Francis—all liable to laughter, and not one of them huffy about his or her status and importance. Whereas all the famous slimy murderers of history—Hitler, Pol Pot, Stalin, Mao, bin Laden—what a humorless bunch, prim and grim and obsessed with being feared. Can you imagine any one of them laughing, except over some new form of murder? Think about it—could laughter be the truest sign of holiness?

Check out the latest Just the Bible Bits episode below!

Catch up on all the Bible craziness with these jam-packed, king-sized episodes! Part 2 of Just the Bible Bits 1 features chapters 23-41.

Episode 5 guest Esther Werdiger once submitted a whole bunch of cartoons to the New Yorker. It’s true. She did. And then she never heard back. If you know Esther’s style, you know that she usually tells longer, more personal stories. So seeing her try to cram all of that into a single frame is very interesting. You can read them all at The Awl, but this one is my favorite:

I’m very excited to announce that Jewcy.com is now the Internet co-host of OMGWTFBIBLE. Starting with episode 19, recorded last night, new episodes will be available exclusively on Jewcy for a full day before they get released elsewhere. So if you want to get your OMGWTFBIBLE fix before anyone else does, point your browser to Jewcy.com in the week after each episode is recorded (Did I just say “point your browser?” What am I, somebody’s grandma?). Episode 18 with Ari Mandel is already up. Really, though, I’m just honored to be part of the blog network behind Jewcy, Tablet, and the Vox Tablet podcast.

As we geared up for this partnership, I sat down with episode 12 guest and Jewcy editor, Elissa Goldstein, to talk about the genesis (sorry) of the show and where it might go in the future. The whole interview is on Jewcy, but here’s a taste:

Where did the inspiration for OMGWTFBIBLE come from? How long do you think it will take to complete?

I find this question difficult to answer because I can’t really name one source of inspiration. To me, OMGWTFBIBLE is the merging of a few strands I was following at the beginning of 2012. I’d long been fascinated by how few people had read the Bible, let alone in the original Hebrew, and would sometimes drunkenly take a Tanach off my shelf and try to read the story of Tamar and Judah to people. In my stand-up, I started reading very loopy sci-fi stories I wrote when I was 9 and interrupting them with jokes about how silly they were. I had just learned about Mishnah Nazir and thought it was absolutely crazy and, for a week, was considering using the interruption story model for the Talmud: I’d project snippets of the Mishnah for stand-up audiences and translate them live, emphasizing their goofiness.

But then I realized I should go back even further.

It is almost Purim. If you don’t know the very silly story, watch now. 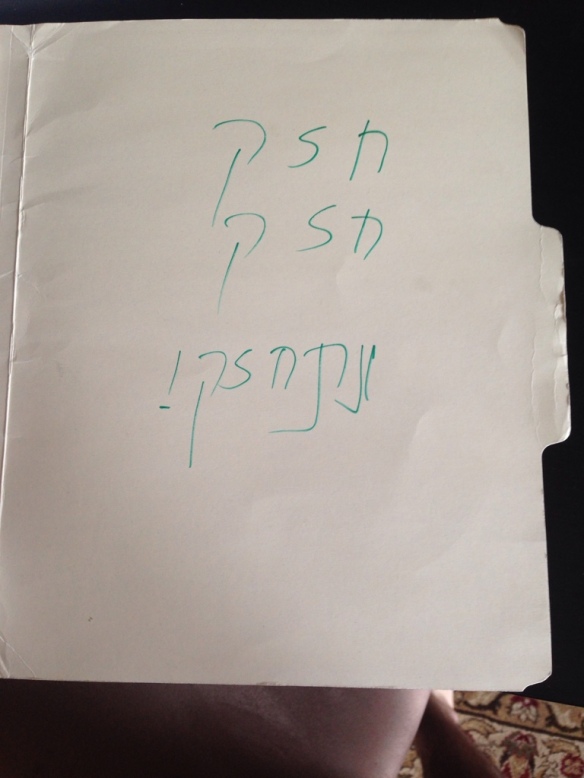 This is how much I have left to edit in Genesis. 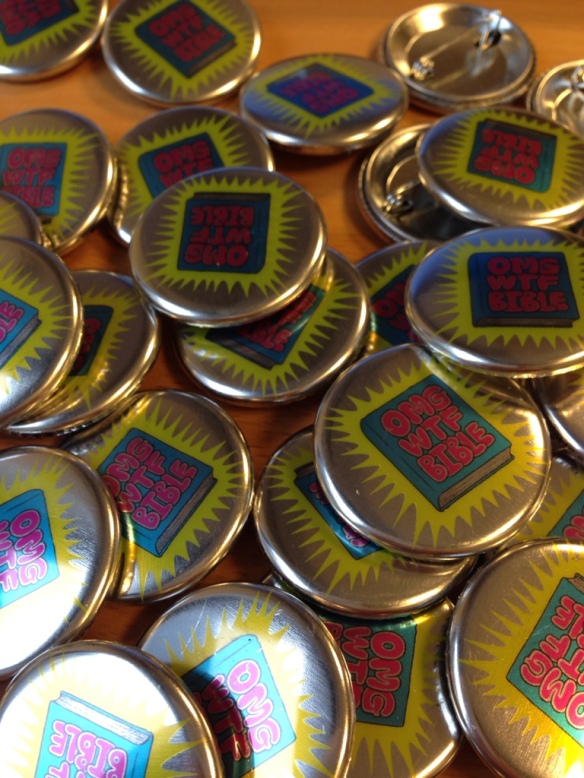 Check out this pile of OMGWTFBIBLE buttons featuring our fresh new logo! Show up to the show at The Magnet Theater on December 30 at 7 PM to get your button free.

I have no pictures to show, but I can assure you that Episode 15 happened last night, was recorded successfully, and will be ready for the Internet first thing Monday morning. Chris Hastings was a wonderful guest and I hope to have him back sometime in the future. The conversation after the show focused on the wide berth between what’s actually included in the text and the tradition of additional stories that has persisted over the centuries. Very interesting stuff! If you want to be part of a future post-show conversation, just show up at a live recording!