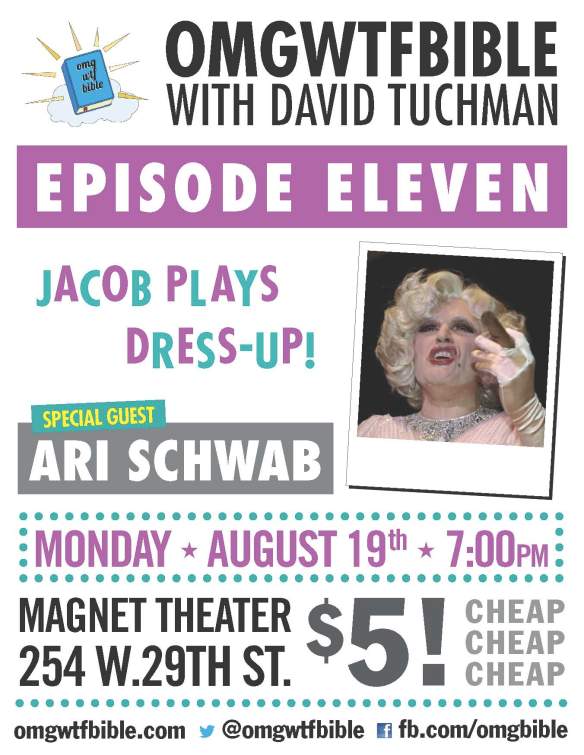 Episode 10 is in the can! Last night was a hell of a lot of fun. As always, the folks behind the scenes at the Double Wide were nice as can be, incredibly helpful, and just generally great to work with. John and I are working diligently to clean it up and get it ready for your downloading and listening pleasure by August 5.

Last night, though, I shared some very exciting news with the audience. In August, OMGWTFBIBLE will have the honor of being part of the Test Drive series at the Magnet Theater–one of the top improv comedy theaters in New York. The Magnet uses Test Drive to find shows to add to their regular schedule. So if the next episode goes well, OMGWTFBIBLE could find a new home at the Magnet Theater. This would mean a wider audience, a space designed specifically for comedy, and, more importantly, a better show. If OMGWTFBIBLE becomes a Magnet show, I’ll be working with the artistic director there to give you a show that’s even funnier, tighter, and more insightful than it already is.
The Magnet will use two things in making its decision: the quality of the show and what kind of audience shows up. The first one is my responsibility. As always, I’ll be working up to showtime to get you the weirdest Bible translation and commentary I can.

I’ll be posting a facebook event tomorrow. In the meantime, you can make reservations here. The show costs $5, which is more than free, but less than the two-drink minimum some places charge. The drinks at the Magnet are supercheap, too! AND: if you’re under 21, you can come! I hope to see you all there and show the folks at the Magnet how awesome you guys are!